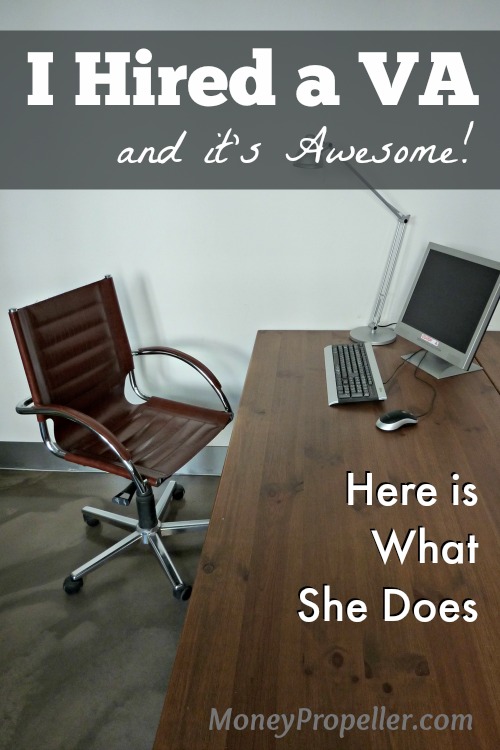 Many of you already know Pauline, from Reach Financial Independence. She is out there hustling on the internet and has some great results to show for it.  Quite a while ago, she hired a VA, or virtual assistant. It really piqued my interest, as I have read about people hiring VAs before, but I had never quite figured out what I could get a VA to do that would be beneficial to me.

One really fantastic aspect of the internet is that you can hire anyone, from anywhere in the world. I know of several people in the United States who do VA tasks, plus people in the Philippines, and in South America. I also know location-independent folks who hail from one place and are able to move around wherever they see fit. It is a pretty fantastic move to be earning Australian dollars while living in Buenos Aires, for example. Another upside of being able to hire anyone, from anywhere, at the rates that apply to that location.

On this site, and also on Unique Gifter, I have several writers. In addition to that, I frequently write my posts offline, on my commute home, typing them up as word documents and then adding links and additional details when I have an internet connection again. I now forward all of the posts that staff writers create and about half of the ones that I make, to the VA.  She uploads and reformats the posts.  Then she adds keywords, meta data, tags and puts them into categories.

She also finds images for many of the posts, primarily using MorgueFile for its royaly-free and no-attribution required images. She puts them into PicMonkey (affiliate link, but the free version is great and doesn’t even require creating an account!) to add a watermark and a title overlay, saves the image with the post title as the name, then inserts them into the post and sets the featured image.

I also have a problem on Unique Gifter where my old theme always displayed the image that was set as the featured image.  My new theme (which I absolutely love, yay Genesis framework!), does not do that. That means I have dozens of old posts that do not have a picture visible. I have asked the VA to go through and update the old images, so that they match the format I am using now, and to insert them into the posts. She’s doing it a lot faster than I was, that’s for sure!

In shocking news, I am fairly lazy. Most of the time in the past, when I have uploaded an image, I’ve done nothing more. There are actually lots of places to add keywords and help your chances of getting more traffic, in the descriptions of photographs. This is another thing I’ve asked the VA to slowly work away at.

Some posts are very similar in style to others, like link round ups and budget reviews and whatnot. Having tentatively scheduled, pre-named posts gives me a quick and easy place to save links that I discover and want to share, plus makes it faster for me to write the posts.  I really love this!

There are so, so many blogs out there! Plus, they write on an absolutely huge variety of topics. The VA adds blogs to a big list I have, so that I can check them out, comment and meet new people.

When I post something new, WordPress and Jetpack will post about it when it goes live, which is usually at 8am Central. If you’re not on twitter at that moment, or when a round of twitterfeed posts goes by, you’re not going to see it. Scheduling social media takes a bit of time, but it absolutely worthwhile. Now I can easily have a new post tweeted a few times in a day, by having the VA set it up in HootSuite and CoSchedule (affiliate link, they have a free 14 day trial).

It might be just me, but I find that the twitterfeed website takes forever and a day to open and then to perform any action. It frustrates me, what can I say. My life is much improved by sending a quick email asking for someone’s blog to be added to my twitterfeed!

It turns out that you can move too quickly for Amazon

. Sometimes, links that look like they are correct, go to the previous thing that you were linking to. Obviously this is rather frustrating, especially when you have created huge resource lists which go to Amazon (like my 500+ Stocking Stuffers for Adults, or What to Register for if you Already Have Everything), like I do frequently. If I have written a post, I ask the VA to double check the links for me, and if they are incorrect to replace them with new ones.

I am quite confident that I am going to find more and more things for the VA to do, as I know that I will come up with more ideas over time and we will get more used to what the other person can do and likes doing.  This is FAR from an extensive list, this is just what I hired a VA to do, so far.

What part of blogging do you wish that you could outsource?