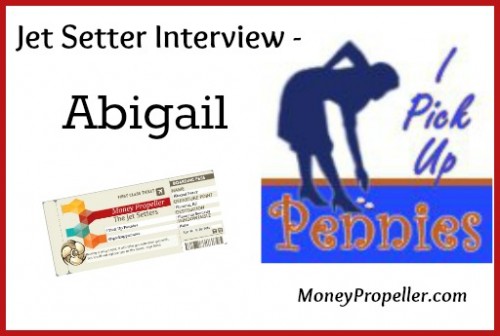 Today, our Jet Setter Interview is with Abigail, of I Pick Up Pennnies fame.

The absolute last purchase, or something substantial?

If it’s the former, then a grocery store trip: peanut butter M&Ms, popcorn, cheese & tortilla chips for nachos and a couple of frozen meals that were on sale. It was a chill-out-at-home weekend with some hard cider waiting for us.

The last substantial purchase… uh… While my mom was here, we took her out to our favorite BBQ place.

And if you’re looking for something not mundane/food-related, I guess it’d have to be a bunch of Ecko jeans for Tim.

Well, the jeans were because Tim finally gained some weight now that he’s not smoking. His pants were a little uncomfortable. So we hit the outlet mall to get him some jean shorts (it’s in the 100s here, after all) that wouldn’t dig in. We got 6 pairs for around $112 after tax. Hooray!

Same thing as my next plane trip: FinCon. That was last October going to St. Louis; this year, it’s mid-September and in New Orleans. During that time, Tim’s going up to Washington to see old friends, and our mileage card means his ticket and rental car should be completely covered. Hooray again!

Short answer: We’re saving from Tim’s dental implants, which will be around $20,000 – 25,000 for his full mouth. We also need double pane windows for the house because we live in Phoenix.

Long answer: All that plus house stuff. For example, we drained savings by about $3,000 to seal up the attic and add insulation.

Recent renovations means we now have a six-foot gap between the rickety old fence and masonry wall. We’re probably going to rip out the fence and extend the masonry wall, so about $2,000 – 3,000. We’re waiting til fall to try, since yard services won’t be in as high of demand and we might get a better price.

My in-laws live in our guest house, which gets pretty hot, so we’re saving up for the $3,300 bill to install a mini-HVAC unit. I started a bank account at Capital One 360, and we’re putting in $100 a month.

I also have a fund for a new washer and dryer, since we don’t know how long the current ones will last. Every time we do a load, I put $2.50 into the fund. We’re up to about $80 in just a few months.

We’ll need to replace the dishwasher pretty soon, too. After some research, it looks like a $700 one is our best bet.

The volleyball scene. (Okay, okay if it has to be a person, then Goose I guess. But yeah, volleyball.)
Let us pause this interview to appreciate the beauty of what Abigail has mentioned:

Well, we both have health problems. I was on disability for a few years until I found my current work-at-home job. Tim is now on disability. So basically my fear is that the flow of money will stop.

If you’re looking for an aspect of it that feels overwhelming, then it’s a tie between getting bills paid on time and large, unexpected expenses.

As a depressive, I can procrastinate on bills, feeling like it’s just too hard right that moment. Alternately, the depression can make those unpleasant surprises feel completely untenable. I’ve been known to hide under the covers for  a bit after finding out about a particularly bad piece of news.

Wow, that is nice of you. I’d go with boring stuff, unfortunately. Pretty much all the goals I listed before: Tim’s teeth, double pane windows, HVAC unit, dishwasher, gap in fence. Those alone would be about $45,000. Then maybe something a bit more indulgent, like tiling our shower stall (to replace an old, ugly fiberglass shell) and put a nice big tub in the main bathroom. (You’ll note that I’m choosing to ignore taxes because make-believe is the one way you get away from them.)

Hulu and Netflix. My fatigue and Tim’s joint problems mean we don’t go out a lot. We get most of our entertainment by streaming movies and TV shows there.

Well, my mom is Donna Freedman, who wrote for MSN Money for several years. So I was raised to be pretty frugal.

Mom had me put half of all birthday and holiday money into the bank, so I got used to saving early on. Once I had a job, I was only allowed $20 every two weeks. Granted, that was nearly 20 years gago. Ugh, I feel old now.

I got sick when I was 19, and I’ve had a hard time working steadily ever since.  That is, until I got my current job working from home. So from age 19 on, I was extra aware of being careful with money. That said, I also wasn’t able to go get groceries as often, let alone cook, so life was also more expensive. An exhausting dance, if I do say so myself.

Imperfect frugality is still frugality, so stop beating yourself up. Save that energy and use it to save more in the future.

Thanks for joining us today, Abigail! You can connect with Abigail on twitter @ipickuppennies and on Facebook.