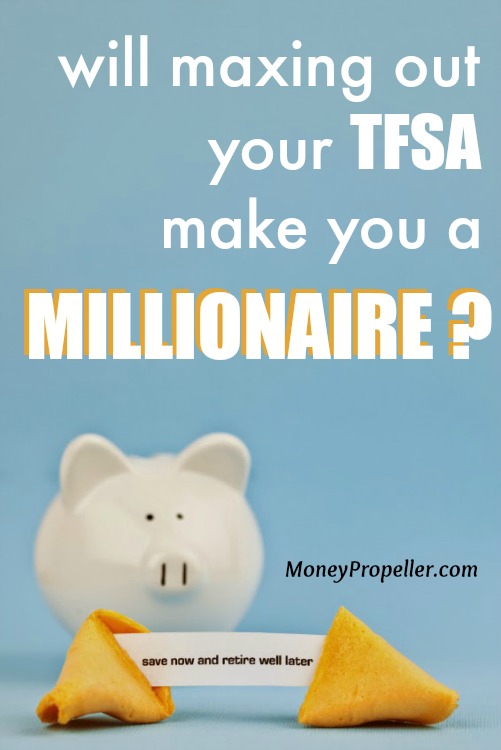 Recently, there has been a whole lot of talk about increasing the annual contribution limit for Tax Free Savings Accounts in Canada.  (They are the loose equivalent of a Roth IRA, for the Americans in the crowd.)  Then, the government went ahead and announced an immediate increase of contribution room, to $10,000 per year, effective in 2015.  Future contributions, however, are no longer indexed to inflation.

The discussion and subsequent changes got me thinking, “How much money do you have if you max out your TFSA?”

I bet I’m not the only one who wonders about that.  Especially young folks.  TFSAs have the potential to provide a large amount of money in retirement!  Literally millions.

Now, we all know that I love spreadsheets, which can answer questions like this pretty darn quickly.  I wanted to know how much I could save in a TFSA under the current rules, and how much more it would be with the potential changes.  So, I made some spreadsheets, and I made some for you, too!  (Of note, I made them, and then the speculation became official, so I had to update the calculations!)

For a good discussion on the practicality of filling your TFSA, strictly mathematically speaking because I believe virtually everyone can put some money into their savings accounts, head over to Financial Diffraction to read The Canadian Retirement Landscape Just Got Steeper.  Alicia examines the percentage of an average income that would be required to fill RRSPs and TFSAs every year.  Leaving that discussion to her, there are also concerns about depleted future government revenues, which I’ll acknowledge are a concern, but not address.

TFSAs are a tax savings vehicle where you pay tax on the money that you put in, and when you take it out in the future, you do not have to pay tax on it then.  No capital gains, no income tax, no tax!  They were introduced in 2009, with every adult over age 18 being able to put aside $5,000 per year in a TFSA.  There is a provision for increasing the amount per year, in $500, based on inflation.  For 2015, the maximum contribution is  $10,000.   Here are the basic details from the CRA on all things TFSA.

If you don’t have the money this year, that’s ok, because you get to keep any unused space.  AKA, you can play catch up!  If you’re 30 right now and have never contributed a dime, you’re allowed to put in up to $36,000, all at once if you’d like.  (If that’s what you’re going to do, I hope you have a solid reason for not doing so before!)

That all depends on your assumptions!  Let’s assume the following:

Obviously there are some flaws with these assumptions, but they provide a framework.

The following are a few scenarios (different from those in the downloadable calculator, which is up to date):

Scenario 1A: Christina the Star Saver

Yes.  You can be a multi-millionaire just from contributing the maximum to a TFSA every year (and earning an average of 8%!).  Using the 4% withdrawal rule, she will have $116,455 in income every year, completely tax free!  All of that for putting aside $460 a month for her adult life.

Scenario 1B: Boden the Brother

Boden is Christina’s little brother, who sees that she’s kicking butt with savings.  He’s a few years younger and the government doubled the maximum contributions.  He’s a stellar saver and socks away $917 per month from age 18 to 65.  He ends up with nearly $6 million dollars when he retires, bringing in $232,911, again with no tax.

Scenario 2A: Kim Doesn’t Catch Up

Scenario 2B: Ashley Doesn’t Catch Up

Ashley also goes to post-secondary, gets a solid job and starts saving, with a doubled contribution maximum of $11,000 per year.  Over time, Ashley’s portfolio grows to $3,915,446, just shy of four million dollars!  That is enough for a retirement income of $156,618, using our trusty 4% rule of thumb.

If Ashley spent five years making doubled payments, to fill the space that accumulated while in school, Ashley would have a $232,911 income.  Ashley is such an awesome saver that socking away $22,000 per year for five years is a drop in the bucket.  As you can see, making up that difference (which is saving an extra $55,000), results in $76,293 more per year.

Let that sink in for a second.

The moral of that story is: save early and save often!

That’s all well and good, but I was older than 18 when TFSAs were introduced!

I was, too.  Scenario 3 is my own situation.  If you do some math, you can figure out how old I am.  Luckily for me, I am young enough that a TFSA can provide a good amount of tax sheltering for me; if you are in your 50s or older, the benefits are not going to be as large for you.

I was around when TFSAs were introduced in 2009, with a contribution limit of $5,000.  We’re going to pretend that I had the money to save in my TFSA at that point in time, okay?  Ok good.  This is one of the scenarios that you can play with in the calculator, based on your own age.

It’s not a six figure income, no, but it is a solid amount of money.  Very solid.  A fantastic piece of my investment portfolio.  If it was taxable, like an RRSP, I would require substantially more income to afford the same lifestyle.

If the limit is doubled, I can have nearly three million dollars completely tax sheltered.  That is a lot of money to not have to pay tax on as capital gains.  Only $421,500 of that will be mine, the other $2.4M would be taxable.  To put some rough and dirty numbers to that, assume I have a 45% marginal tax rate in retirement (which is a wild-*** guess), and capital gains are taxed at 50% of your marginal rate.  Making several other assumptions, I would be paying $531,888 in taxes.  Ouch for me.  Ouch for the lost government revenue under this scenario!

Max out your TFSA!

If you are lucky enough to be born after 1991, you can build a portfolio that will support a six figure retirement income, if all you do is max out your TFSA.

Maxing out your TFSA can tax-shelter millions of dollars.

It will show you:

Have you managed to max out your TFSA (or your Roth?)