Today, our Jet Setter Interview is with Vanessa, of Vanessa’s Money fame. 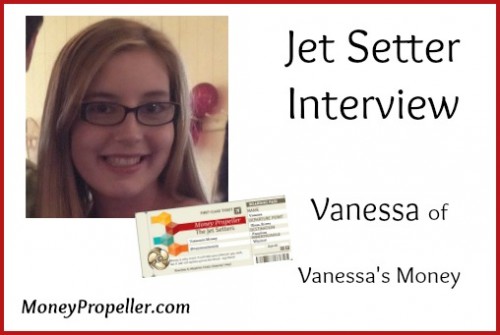 My name is Vanessa and I blog over at the aptly named Vanessa’s Money. After graduating from university and traveling through Europe, I worked for awhile in Calgary before jetting off to Korea to teach English to businesspeople.

The last non-food thing I purchased was MAC make-up

I like to look as unhideous as possible and, in a land where most of the make-up contains skin bleach, I spent a little extra to go with a brand that I know and can trust.

I was on the largest airplane of my life a few months ago. I was heading to Seoul, and then ultimately Ulsan, to start my new job

My lifelong financial goal is to do whatever I want, whenever I want. This is my goal because it’s absolutely the only way to live… Sort of like YOLO but with long-term financial considerations taken into account — I don’t want to spend all my money by 60 and then live like a pauper!

I haven’t seen Top Gun since I was about 10 years old and I have no idea. Let’s pick Tom Cruise.

Money runs out faster than you’d think and, even when I’m steadily employed, I freak out if I have less than a certain amount of net worth.

1) Update my net worth spreadsheets. 2) Figure out if this money is taxable. 3) Send it on over to my RRSPs. 4) Brag about how my RRSPs now are fully-funded.

COFFEE! Back in Canada I would have a cup or two a day of the regular stuff but here in Korea it’s about the same price to get drip coffee as it is to get a fancy latte. Mmmmm, lattes.

I was thrown into the pilot seat at 17 when I finished high school. My summer earnings were gone within a month and I tried to survive on $36/mo for personal expenses. Eating McDonald’s french fries for lunch every day and hoping that you’d win something good in McDonald’s Monopoly was a giant lightbulb that life is not fun when you’re poor.

REEVALUATE YOUR PRIORITIES! Are you spending your money on limos and partying every week? Don’t hate on me because I can afford to go to Europe but you can’t — if you want something, look around you and see what you’d be willing to give up in order to get it.