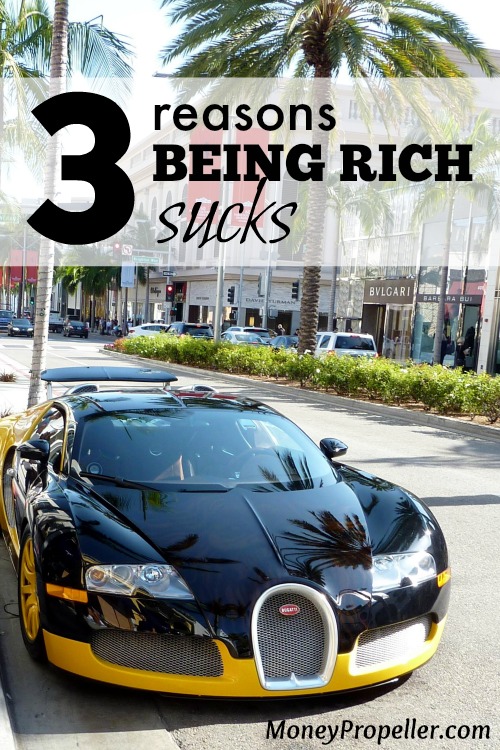 If I had a million dollars, everything would be awesome! Right? Well… maybe not. It turns out that being wealthy can be expensive.

After spending a lot of time and effort becoming wealthy, many millionaires and billionaires discover that it can be a lot harder to hold on to their money than they ever would have anticipated, and that with money frequently comes a great deal of stress. Here are three reasons it sucks being rich.

You Could Be In Danger

Now, depending on how a person becomes wealthy, it is possible that they will be well known, not only in their community, but in their country, and maybe even all around the planet. That sort of attention can be nice, but it can also fix a target to the person’s home.

Professional athletes, for examples, are frequently the target of burglary attempts, because would-be-criminals think that the athletes will have their money stashed somewhere in their home – sometimes they do! And not only is their home a target, but they are, too.

When out at night, wealthy people are frequently the target of muggers who assume that they will have loads of cash on them at all times.

As a result of security concerns, many wealthy people find that they need to virtually shut themselves off from the rest of the world.

Many wealthy people, particularly those who come into a large amount of money quickly, frequently find that many of their friends and family members think that they are entitled to various amounts of their money.

Many wealthy people claim that they feel that they cannot say no to their family members, and as a result their family and friends slowly (or quickly, depending on how brash they are) bleed them of their riches.

And once the money’s gone, it’s gone, and the family and friends rarely repay anything.

If money troubles do eventually come about, many once-wealthy people find an unsympathetic public. It seems impossible that someone could go from having millions of dollars one day to filing for bankruptcy the next, but that’s increasingly common for people who come into large amounts of money quickly, especially athletes.

Now, even if someone has good boundaries, is able to say no when it’s appropriate, and doesn’t get into tough financial situations, it can be extremely expensive to keep high-price items such as homes and boats clean and organized.

You’ll Have Trouble Maintaining Your Possessions

It seems obligatory that wealthy people have large homes and boats, but not only do these things cost a lot, their continue to act as a money drain to keep them nice and functional. CNN Money has a great infographic that breaks down some of the parts of a wealthy-lifestyle that quickly add up to be a substantial annual bill.

In short, some of the most basic awesome-rich-people-stuff turns out to be ridiculously expensive. For example, it costs around $75,000 per year to have a penthouse apartment cleaned – imagine how much larger it would be for a large home.

Or if you have a family and need childcare, it costs around $80,000 per year for a nanny.

So, you can see how expenses like that could quickly add up and drain away your savings.

Would I want a million dollars? Totally! But it’s important to keep in mind that there are costs that come along with anything, even wealth.