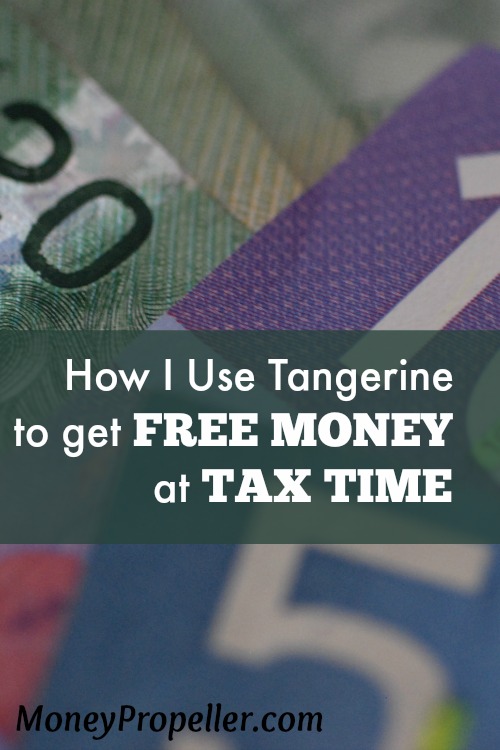 If you have been hanging out in the realm of Canadian personal finance for a little while, you will have heard of Tangerine, previously known as ING bank.

There’s a reason these folks are so ridiculously popular in the personal finance world. Yes, even a bank without physical locations is wildly popular.  They offer free banking, because hey, they don’t have nearly as much overhead to cover from your fees.

They offer solid rates on deposits.  Really solid rates.  ING is a great place to stash spare money, and I have done so a lot in the past.

Those solid rates are why I bring up Tangerine during tax time.  They have a tendency to offer promotional rates on very short term bonds during the beginning quarter of the year.  Specifically, GICs held within a registered savings plan often come with a reward amount, and ING frequently offers 90-day GICs.  They want you to lock your money into a registered account with them, so that it’s harder to move later.  In order to entice you to do so, they have generally offered a straight up bonus.  Until March 31, 2015, they are offering 2.5% on all new deposits.

That’s a pretty darn good rate, might I add.  (It only applies on new deposits up to $250,000, but we’ll assume that’s not really a problem at the moment.)

If you want to lock money into an RRSP, then a bonus for doing so is basically a lollipop for doing something you were already going to do.

Want the lollipop?  Awesome.  Here’s the even better part:

Copy and paste it (double click on the text, then press Ctrl and C at the same time).  Then head over to Tangerine.

Click on Sign Me Up, complete the enrollment and send in a cheque.  Within 30 days you’ll have an extra fifty bucks that’s yours, for keeps.

I’ve Been Doing This for Years

I have varying levels of promptness on my taxes and varying levels of knowing what stocks I want to buy.  That means dumping my RRSP monies into my Tangerine account before the deadline and letting them hang out, collecting an awesome GIC rate or an awesome interest rate, whichever is the best lollipop for the year.

That’s how I use tangerine to get FREE money at tax time.  It’s better than the alternatives that I have considered for myself.

It’s a pretty sweet strategy for getting your money in before the deadline and for getting a nice little cash boost.