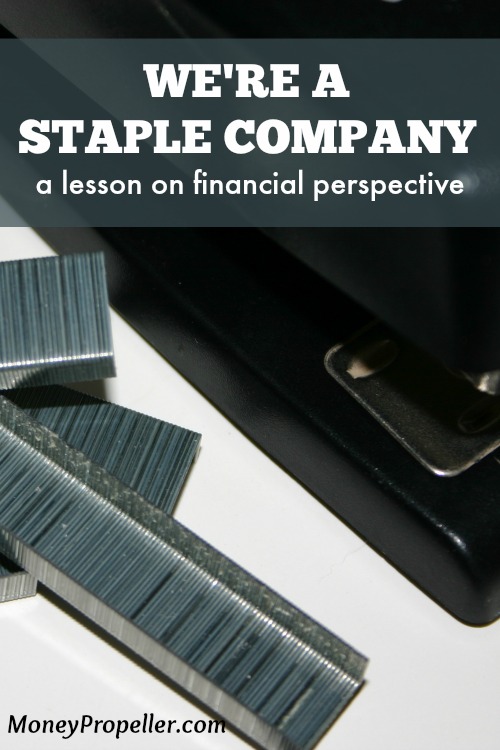 One of the big bosses at my day job came from a different industry. The industry that he left is one with which I am rather familiar, and it has been in a state of very tight economics for coming up on two decades. The industry that I am in is rather cyclical, and we are now in what appears to be a five-ish year tight part of the cycle.

I hope some of that made sense. Basically: money is tight at work.

During a regular meeting with all of the employees, this boss stood up at the front and told us a story, from a time when he worked at a company that was taken over. The new management presented to them. Let’s just go ahead and call the new management Sally.

Sally stood up at the front of the room. Next to her were a few different things on the desk. She picked up a single black binder clip and showed it to the people assembled, anxious to hear what things would look like under new management.

“This is a binder clip, how much do you think this cost?”

Answers from the slightly confused crowd ranged from five cents to a dollar or so.  Sally said, “That’s in the right ballpark, this one cost 33 cents.”

Then, she set it down, and picked up something new. It was harder to see, with her standing way up at the front, but she said “This is a large paperclip, just one. How much do you think it costs?”

Now the audience was starting to get the hang of things, tossing out guesses and answers more freely, now that it was obvious they could relax enough to do so. Guessing the price of a paperclip can be a bit tricky, as most of the time we take for granted that they are around and that they don’t cost very much. The crowd estimated the cost of a paperclip to be anywhere from half of a cent to ten cents. After a two dozen or so responses were offered up, Sally continued on, “Thanks everyone, this particular paperclip cost our company seven point two five cents. You’re getting the hang of this now!”

Setting the paperclip down, she picked up yet another object, or so it appeared. She asked the audience, “Can anyone see what this is?”

Syed, in the front row, piped up with a question, “Is it a staple?”

“Yes, it is a staple!” Sally replied, holding it high above her head, on the off chance that more people would actually be able to see it.

“You know the drill, how much do you think this single staple costs?”

Most people in the audience could figure out that staples came in boxes that held hundreds, if not thousands of staples, and cost a few dollars per box. There were longer pauses as people attempted some quick mental math, to determine how much a single staple could possibly cost. Guesses ranged all the way from 2 cents down to a thousandth of a penny.

“This is a harder one, I know,” said Sally. “This staple cost six ten thousands of a cent. That’s three zeros after the decimal.”

Putting one hand on her hip and holding the other straight out in front of her, holding the staple at shoulder height, she stared at the staple. Everyone in the room also focused their attention where her gaze was looking, right at the tiny little staple.

“We,” she said, with a lengthy pause for emphasis, “are a staple company.”

After letting it sink in for a minute or two, she set the staple down and explained to the employees that the only way for the company to continue to survive is for the new division to adopt the culture of the new company, where every cost and every waste matters to the bottom line. Everyone already knew they had been bought out because their operation was struggling to stay afloat.  No, they weren’t a staple manufacturer, but like any business, they used staples, along with a myriad of other parts, supplies, time and labour, which all have their costs.

There are two quotes that tie into this story, one is the antithesis, the “penny wise and pound foolish” statement, which holds a lot of merit. The one I’d like to focus on, however, is the following: 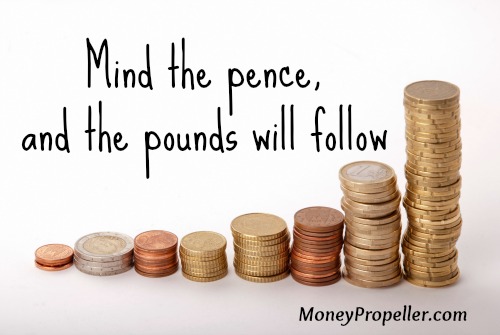 (Feel free to pin this image!)

All of us can apply this lesson to our own finances, and to those of our employers.

As Nelson reminded us when he wrote about Warren Buffet making a terrible financial blogger, $25 invested today is $1130 in 40 years. Save a bit, here or there, whether it is cutting your costs back so you have money for other things, or putting it in the bank, little bits here and there really do add up. Just think of the power of generating side hustle money to throw into savings. Using Nelson’s numbers again, $2500 is $113,000 in 40 years. Not too shabby, eh?

Can you say in your own life, “we’re a staple company?”