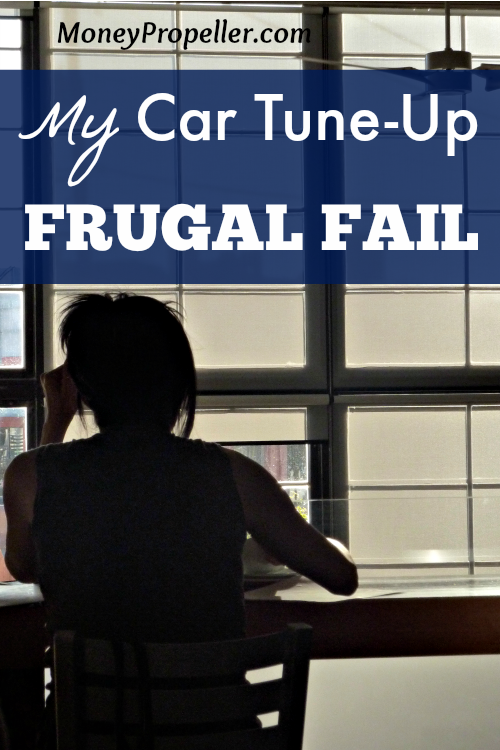 As you may know, if you follow me on twitter (all the cool kids are doing it), I live in a small town. It has its pros and cons, which I know I will write about one day. One of the cons is that some services are far, far away. We bought a diesel Jetta a few years ago, because it destroyed the competition on all fronts when we were looking for a car.

The car is awesome. The downside? The closest dealership is an hour drive away. While the car is under warranty, we’re getting all of the work done by a dealership, to ensure we’re not voiding our warranty or any other costly mistakes like that!

So one Friday morning, on a day I didn’t have work, I got up and headed to the dealership, for a ten am appointment. On the way I thought, “Darn, I forgot to grab a water bottle; that was dumb.”

When I arrived, I was in luck! I was doing a quick clean-up of receipts and whatnot and low and behold, my spouse’s Nalgene was lying on the floor by the passenger’s seat. That’s a frugal win!

My plan for the day was to head to a coffee shop and blog for the nearly two hour tune up. I figured that would cost me $3-5, depending on what the menu looked like. No big deal.

Plus, typing on a laptop in a coffee shop is just so cliché, one needs to do it every once in a while.

I am not terribly familiar with the town, so I asked the person at the dealership service desk about coffee shops. He said, “Tim Hortons.”

I figured I may have to resign myself to Tims. Clearly, this guy and I are on different wavelengths when I say coffee shops. In my mind, “coffee shops” and “place to get coffee” are entirely different things. Perhaps that is not a universal differentiation.

Instead of committing to Tim Hortons, both locations here being places I have dashed in and out of many a time, I asked the courtesy shuttle driver to take me to a coffee shop. His suggestions?

Now that was getting even further off base!

I settled for Starbucks. What I was hoping for was a small, local coffee shop. I should have asked a friend before leaving, I guess. I arrived at Starbucks and promptly realized that I completely forgot to eat breakfast.

Well, that was dumb, and expensive.

The menu at Starbucks is pretty appalling! I can’t eat dairy, so out went the yogurt, which was the only healthy choice available. I’m not supposed to eat wheat, but that’s not a hard and fast rule. Everything else was horribly bad for you and full of wheat. Except for the rice krispie square, which would not do for breakfast and was, to quote my friend Kathleen, “the size of a baby.” Everything else had wheat, and sometimes large shiny crystals of sugar coating the top, or an icing glaze.

Nearly $10 later, I had a multigrain bagel and a grande for-here blackberry soy latte. Oops. If I had wheels, I probably would have gone to the grocery store and bought something to eat there, like a box of granola bars for the same price, which would get me through today and then some.

I’m not going to get home until possibly 3 o’clock, after running several errands. I should have brought lunch with me, or at the very least a few clif bars to tide me over. But no, I left the house with my netbook, wallet and cell phone. Today is probably going to set me back an extra $15, all because I didn’t think for five seconds before leaving the house.

$15 isn’t much. But that’s $15 I would much rather put toward something that I actually wanted to buy, like a trip or the new food processor I’ve been eyeing up.

Planning.  It saves you money.

Not planning can get expensive, especially in a few particular scenarios 😉

Do you have any frugal fail stories that were the result of poor planning?