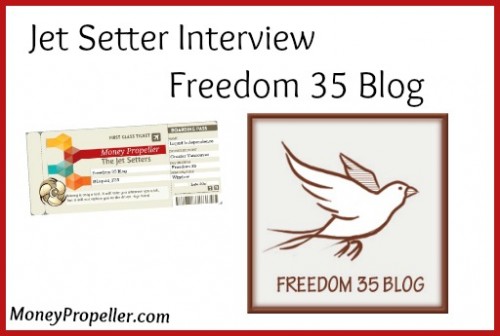 Today, our Jet Setter Interview is with Liquid, of Freedom 35 Blog.

Hello. My name is Liquid. I’m a full time graphic designer from Canada. I run the site Freedom 35 Blog in my spare time and write about investment strategies as well as commentaries about business, finance, and economics.

A silver maple leaf coin from the Canadian Mint

Because it’s shiny and I just had to have it.

I was last on an airplane in April earlier this year. I was taking flying lessons in a beaver aircraft (2-seater)

I’ve always liked the idea of early retirement and being free from having to work until I’m 65. After some calculated projections I decided financial freedom is possible before my 35th birthday if I play my cards right.

Money represents power and influence, so if it is put into the wrong hands then really terrible things can happen to human rights and the environment.

Wow, thank you. That’s very generous. I would probably use the money for the down payment on a rental property.

Indie games on Steam when they go on sale.

I’ve had control over my own finances for about 6 years now. I worked at Safeway temporarily when I was younger, but I didn’t start to make any real money until my career began in 2008. I’ve had a bank account since I was 16 though. I think that was when I started to manage my own money even though I didn’t have much at the time and was still living off my parents.

Pretend you have a sky-writing airplane (that can write as many words as you want.) What is the main money message that you want the world to see?

Nobody cares more about your money or your future than you do, so make it a priority to take control of your personal finance, increase your financial literacy, and always spend less than you earn so you can invest the difference in a low cost, diversified portfolio which will reward you with dividends indefinitely.

Thanks for joining us today, Liquid! You can connect with him on twitter @liquid_f35, he tweets a lot of entertaining puns and jokes.