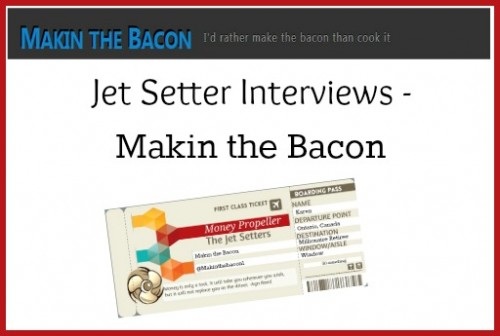 Today, our Jet Setter Interview is with Karen, of MakintheBacon fame.

Thanks! I’m Karen- writer, founder and owner of MakintheBacon.

A 12 pack of Pabst Blue Ribbon. It wasn’t for me though.

We had people over for dinner and needed to get more beer.

May 2014. I went to Greece and would love to go back there again someday.

I’d have to say trying to plan a small and intimate non-traditional wedding, if that counts as a financial goal. I’d been humming and hawing over the idea of marriage, thinking the only way to keep the costs way down was to go civil or elope. Then I realized I could put the same mindset for a wedding, the way I did for my finances. If it was important to me, I’d do the intensive research, find a way to make it work and make it a priority.

I don’t have a favourite person in Top Gun. I saw the movie once; a very, very long time ago. I do like the “Highway to the Danger Zone” song though.

That it can be used to manipulate and control things and people. It’s also scary what some people will do for money.

If I was super-rich and gave you $50,000 with no strings attached, tomorrow, what would you do with it?

My Blackberry. Yes, I still have a Blackberry. We don’t have a landline and just use our cell phones.

I would say the first time I sat in the pilot seat with my money would be when I went away to school. So that was over 20 years ago. Yikes. I feel old. I only had a job during the summers as a teenager. My parents were pretty strict growing up and preferred that I focus more on my education. I didn’t work part-time until my last year of high school. Unfortunately I don’t recall having any particular lightbulb moments.

Money: Work hard to earn it, but be careful not to burn it.

“Money: Work hard to earn it, but be careful not to burn it.”- @makinthebacon1

You can read more of Karen’s writing at MakintheBacon. She’s also on twitter @MakintheBacon1, give her a follow!