Today, our Jet Setter Interview is with Jason, of Phroogal fame. 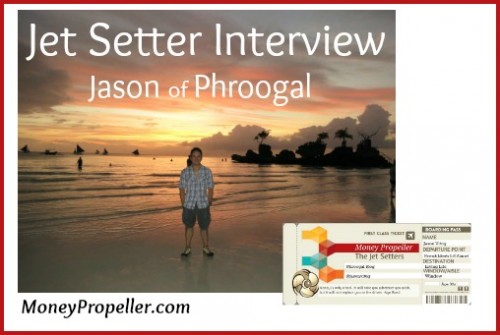 Woohoo! I’m one of those who love the words “prepare for takeoff.” I’m Jason Vitug founder and blogger at Phroogal.com. I’m a creator with a passion for hearing, creating and sharing stories. I’m a New Jersey native who moved to Silicon Valley to be a senior executive at a credit union for about 3.5 years. I “retired” early and spent an entire year backpacking around the world in 2012 visiting 20 countries in 12 months. I’m a first time entrepreneur with a goal to help millions of people find answers to money questions to help them live richer lives.

I spent $12.50 on a movie ticket. Yea, well worth the expense. Did I mention I love stories?

My purchasing habits are pretty self controlled. I typically watch a movie once or twice a month using bulk tickets for discounts. It was pretty late and had an itch to watch this particular movie.

A month ago, I was flying out of San Francisco back to Jersey.

I’d say financial independence but that isn’t really an issue at the moment. Since coming back from my backpacking trip in 2013 I’ve been working on my startup company. I guess my current financial goal is for Phroogal to be funded or generating revenues

I’ve always had a desire to help people and I didn’t know what that would be exactly until the last 5 years culminating atop an 8th century temple in Myanmar. It was then I realized I wanted to help others uncover their lost passion and fund it to reality. By funding, I mean learning more about the power of money through access and answers.

Maverick. I’ve enjoyed Tom Cruise movies since the bartending one (I can’t remember the name of it) up to his “latest” box office disappointment Edge of Tomorrow.

I’ve always enjoyed flying. There was this one time I was flying from San Francisco to Las Vegas for a conference where my plane went into a nose dive. I was so scared staring out the window and clutching the armrest. Overhead bags were flying, the cart rolled down the aisle and one of those soda holding bins flew and hit the girl next to me. At that moment, I recall saying to myself, how will my family know about my will and insurance information?

When it comes to money, I think the fear is that with all the planning, the planning is never really enough for the enevitable. I’ve learned at this stage in my life that money is like any other thing that can be purchased with time. Time is the most important asset we have that’s given to us at birth and we have complete authority to determine its dollar value.

OMG! Will that be Paypal or check? $50k is a sizeable amount. I’d use as additional fund to fuel my passion with Phroogal. I’ll be able to get another part-time programmer, hire a few more writers, get a VA to help me streamline my business life…so yea it’ll become an investment towards the startup.

Yummy, chocolate caramel covered peanuts. Ha, I don’t have a specific habit I pay for daily but if I had to think of one it’ll have to be my reliance on my cellphone service. I’m not paying peanuts however at a cost of $95/month. Yup, I agree. I need to get out of that contract and switch which I plan to when my contract expires this month.

I didn’t work until I was 18. I was pretty busy with school activities to have a job. My first job however was working at deli delivering Portuguese food and took a second job as a pizza delivery boy. Held two jobs until I got a full-time job working at Newark International Airport. My lightbulb moment happened 12 years later. I was a late bloomer and honestly if I knew then what I know now…wow.

“Time is the most important asset we have that’s given to us at birth and we have complete authority to determine its dollar value. Value your time as if your life depended on it.” I realize the last part might sound like a threat written in the sky.