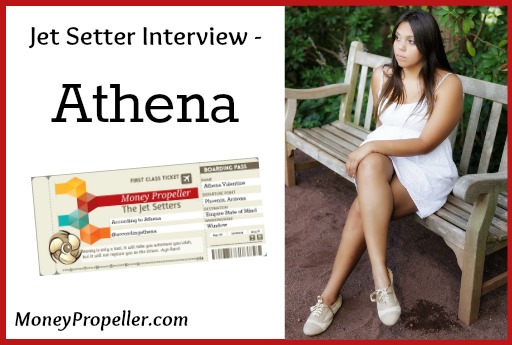 Today, our Jet Setter Interview is with Athena, of According to Athena fame.

My name is Athena and I am awesome. I enjoy singing off key while drinking coffee. I’m a non-profit professional by day, Criminologist by night and I blog currently over at According To Athena. I’m also a staff writer for Phroogal and I am currently the social extraordinaire for the Plutus Awards. I’m planning the Plutus Awards happy hour and I also coordinate our social media.

Groceries! I had it in my head that I wanted to make homemade gluten free chicken noodle soup but without the chicken. I ended up eating cold cereal instead. :O

Frys. I am so boring. Can I redeem myself later?

The last time I was on an airplane was going to and from Orlando two weeks ago for my non-profit’s national conference. I won a national award based on my program and integrating dog therapy to teach youth with barriers emotional intelligence!

My current financial goal is to replace my emergency fund and grow it to a much larger one in the next year. I had an emergency root canal a few days ago and I wiped myself clean even after having health insurance! Even though I thought I was saving adequately, I realize how vulnerable I am as a young single woman financially.  I also decided to get my own apartment this year and live by myself for the very first time. While it may cost additional living expenses up towards $300-400 a month, I think it will be very beneficial to me personally and help me heal from my past. 🙂 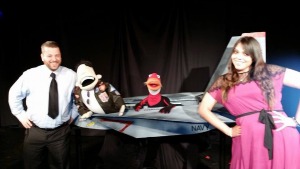 Ice Man! It was Maverick until he tried to make out with my boyfriend during a Top Gun puppet show.

I get really overwhelmed when I start thinking about retirement. I’m behind but I’m not really educated in this part of finance and I don’t even know where to begin!

OMG! Well, I sound super corny but I would would do the following.

I’m a coffee junkie so I can’t live without Starbucks. I know about the latte factor but there is nothing like having a hot venti White Mocha with whip on those days where you just need one!

I’ve been working consistently since I was 17. My lightbulb moment was when I was 23 and had to come up with a $1,000 in tuition out of pocket because of a student loan disbursement delay. My partner at the time had money he could lend me but refused since I was poor with money and not very dedicated. I was so angry at him for years but it was probably the best thing he ever did for me.

I have lightbulb moments all the time though, honestly. In life, things will never stop happening to you and you will never stop learning from them, which is a good thing if you allow it. Never stop growing and learning what works for you because you are a work in progress!  What worked great last year might not be so great today.

DON’T BE A HOT MESS

Thanks for joining us today, Athena!

You can read more of Athena’s writing at AccordingtoAthena.com. She’s also on twitter @accordingathena, and is a pretty active twitter-er.  You should follow her.