Today, our Jet Setter Interview is with Amanda, of My Life, I Guess fame. 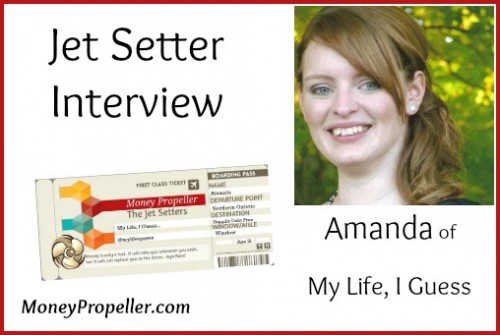 Hiya, I’m Amanda, the voice behind the blog My Life, I Guess…I currently live in Northern Ontario with my fiancé and 2 siamese cats in a poorly managed rental unit (which makes for interesting stories if nothing else). I have a background in theatre, currently work in education, but still don’t know what I want to be when I grow up. I dabble in personal finance, strive to achieve 101 things in 1001 -2002 days, and deal with grown-up problems while I drink beer and watch too much TV.

My fiancé and I both bought ourselves new MacBooks! (I promise, this is the most lavish thing I bought in years!)

We both have hobbies that rely heavily on computers (blogging for me, recording music for him). I’ve been waiting a long time to upgrade my old laptop and he has never owned a laptop at all. We had an extremely frugal summer after I was laid-off and decided that we needed this (within our budget) pick-me-up when our employment situations finally improved.

The last flight I took was at Christmas to visit family that live on the opposite side of the province from me.

I just want to be debt free! I spent too much time in school, took out too many loans, bought a brand new car, and spent too many years working a dead-end job. 5 years after graduation, I’ve only paid off 10% of my student loan – and now I’m no longer even interested in working in that field.

I hate having this constantly hanging over my head and I’m worried about how this will effect my future goals (like a wedding, owning some land and maybe a kid or two) and ability to get ahead.

Many people harbour some sort of fear of flying. What do you find the most overwhelming or scary about money?

For me, it’s the unknown. Because I haven’t settled into a career yet, I’m being bounced around between contract positions that offer no job security. How do you plan for the future when you don’t know if you’ll still have a job next month?

It also makes me feel guilty when I do spend money because I feel like I should be squirrelling it all away – just in case.

My instinct is to say that I would use it all to completely pay off that aforementioned student loan debt – but I would probably only use $35,000 for that. I’d use $5,000 for my upcoming wedding and the remaining $10,000 towards a downpayment for a house and/or property. (Also, thanks Anne! You’re too kind!)

Lots of things “cost peanuts,”what is a small expenditure that you just can’t live without?

Does Subway count as small? If not, it’d have to be candy and chocolate – especially when vending machines are involved.

I was always really good at saving money as a kid. I babysat a lot and since I lived in such a small town, there wasn’t really anything for me to spend my money on, so it all ended up in the bank. I worked throughout University and was able to save up a lot then too, but because I wasn’t paying attention to my spending at all, it all just sort of vanished on me somewhere along the line.

I always thought I had a good idea of my finances because I knew how much money I had in the bank, but apparently there’s a lot more to it! It wasn’t until I started reading personal finance blogs in late 2012 that I really started to take this thing more seriously. Better late than never, right?