Today, our Jet Setter Interview is with Alicia, of Financial Diffraction fame. 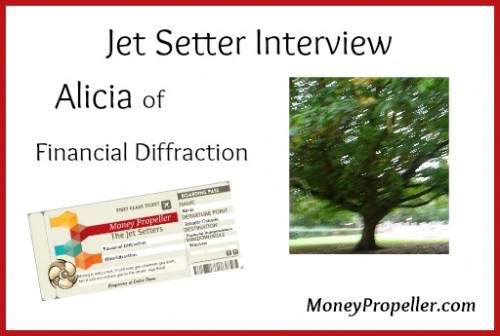 I’m Alicia, a “debt blogger” with bigger goals after that. I write about my debt on Financial Diffraction to keep myself accountable, and pretty much anything money-related that I run into on a day-to-day basis. I also talk about cats semi-frequently. It’s just how I roll.

Aside from boring every day items like groceries and toothpaste, I’d say it’s probably my Egyptian cotton duvet cover. My duvet is great, but adding this cover on it… it’s like sleeping in a cloud! And I got an awesome deal on it that makes me feel a bit better about it.

My old duvet cover was a hand-me-down from my aunt. And although she’s a lovely lady, her taste in patterned fabric is questionable at best. Think mid-90’s country, folksy pattern. I couldn’t handle it any more. I might be in debt, but I still have eyes! Yes, that’s likely a bit melodramatic, but I couldn’t handle the ugly any longer.

Last flight I was on took me the majority of the way across the country to Alberta. That was back in June to visit my closest friend before she started a whirlwind three year medical school program.

Well, I think it’s a multi-step list for my financial goals. First, I want to get a positive net worth. Then I aim to crush the last of my debt. After that I am gunning for Financial Independence.

I just woke up one morning and thought “this is ridiculous – I have way too much debt”, and I was about to be thrust out of grad school without a job lined up. Thankfully I found a job and started to get my act in gear, but it took awhile.

Then I realized… I don’t really like my job. And I hate being stuck somewhere because I need the pay-cheque. I am not looking to retire at 35 (I’m a little late for that flight), but I’d love to be able to tell my boss to shove off without the restraints of money keeping me quiet.

I think it’s just so daunting that it’s something you need for your entire life, and you need to balance your enjoyment now with what you’ll need in retirement. I’m 28, with not a lot to my name, but I have a long investment horizon – what the heck will I want when I’m 68 in 40 years? Who knows! So just save as much as you can now, and work out the details a bit later.

Pay off my debt with about $15,000 of it. Another $5,000 or so to a nice vacation. After that, I’d love to renovate my basement in my rental property. It would make it so much more functional. It’s stuck in the 70’s with faux-wood paneling on the walls, styrofoam insulation, and even a bit of orange shag carpeting stuck under a jack post. Yep, it’s a beaut!

I really like my takeout coffee on the way to work. It’s less than $2 per day, and it’s needled itself into my morning routine.

I’ve had a job since I was 12. Back then I baby-sat, and when I turned 16 I started working part-time in retail. Side-note: bookstores are awesome places for teen jobs, but horrible for savings goals if you’re a bookworm.

Up until I was last year, I was on autopilot. I worked, made money, and paid bills. There wasn’t anything conscious about what I was doing… just what I knew I should be doing. But I wasn’t getting anywhere; I was just treading water (or flying in circles).

My lightbulb moment was one of those fluorescent lights that slowly starts turning on. I got that things were bad, but it wasn’t enough to really light up the room and get me going. Then a few more months went by and financial information that I was learning started to sink in. And the momentum keeps growing.

Like most things in life, money is about balance. We can get so gung-ho with short-term goals, and financial health is something that is so much more than that. It spans a lifetime. Allow yourself some pleasures even while achieving your goals, because you can’t put everything off for later.

“Like most things in life, money is about balance.” – @FinDiffraction

You can read more of Alicia’s writing at Financial Diffraction. She’s also on twitter @findiffraction, give her a follow!