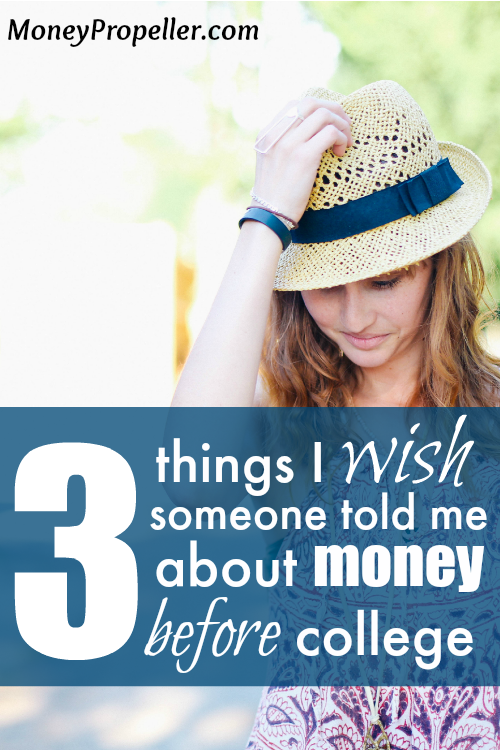 There is not a lot that I regret in my life, but not knowing about my money sooner is one of them; had I started at a younger age (perhaps in high school!) I would have definitely been better off and smarter than having to figure it out on my own once I graduated with a heap of student loans to pay back at rather high interest rates.

Here are the three things I wish someone had told me about money before I started college:

1. Compounding interest can be your best friend or your worst enemy

Compounding interest is a wonderful thing, but only if it is working for you rather than against you. When I graduated, the interest rates I was paying back at the time were an average of 6% and with the amount I had borrowed to pay for my degree, it was literally dollars a day in interest charges that I was paying for the entire time I was clearing my student loans.

For each day I didn’t repay my loan in full, I was losing more and more of my salary towards and it made me feel rather sick but it motivated me to clear my loans as soon as possible.

In contrast, after I had cleared my student loans, I was able to relax when I had savings in the bank because the compounding interest was now working in my favour, generating cash for me while sitting in the bank or invested in the stock market.

If someone had told me or alerted me to the presence of compounding interest affecting your student loans and savings before I had started college, I may not have made certain financial decisions had I known what I know now.

2. Practice living frugally and make a budget to live with

Ever hear of the phrase: “living like a college student”? Well I did not do that. I didn’t even know what the word ‘frugal’ meant, let alone that it would be common sense to make a budget and stick to it.

In my mind, I had taken out a whack load of student debt and this was all the money available to me. I allocated money from that debt to make sure my tuition and books at the very least were covered, and then I saw the rest of it as ‘free money available to use’, which was one of the dumbest things I have ever told myself.

As a result, because I was pre-approved for so much credit, I spent every penny and didn’t think about the consequences until I graduated and had to start paying it all back.

If I had made a budget and stuck to it, perhaps I would have been able to slash those loans in half, which would have made a significant difference in how soon I cleared them as well as my current net worth today.

3. Take only as much as you need

When applying for student loans, I took the maximum that was available to me, and as mentioned above, I spent every penny.

To help limit myself, I should have only taken as much as I needed, based on a budget created, or at the very least, told the banker that if I needed more credit, I would come back and apply for it.

Having a limit on how much student loans you can take out would have made a big difference in how much I saw I could spend each year, at least, this was something that could have helped in my case.

The bottom line is that going to college is never an easy or cheap financial decision, but had I known these three things before attending, I would have been a lot better off after graduating.

Sherry (saverspender) got out of $60,000 of debt in 18 months using her budgeting and expense tracking tool, and now blogs over at Save. Spend. Splurge. where she talks mostly about money, particularly spending it (like on clothes!!), but also about style, minimalism, career and anything that strikes her fancy. She has a weakness for butter croissants, macarons, and a well-made cup of tea.