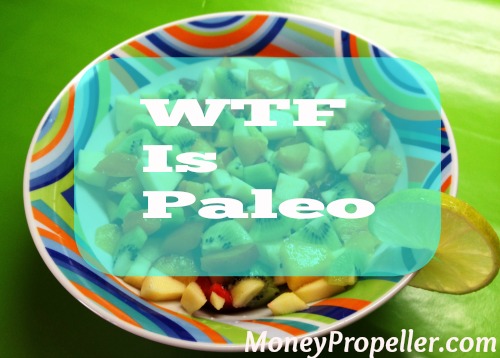 Paleo is quite the buzzword, but if no one’s explained it to you before, you’re probably left thinking “WTF is Paleo?!”  Josh lays it out pretty clearly for us, don’t worry!

Have you ever had any mystery illnesses, or just kind of felt “not as great” as you used to feel? Then let me introduce you to the Paleo diet. It might just work for you!

Over the years, my wife and I have had a number of health issues. After trying different approaches to food and experiencing little success, we gave the Paleo diet a try… and we’ve been elated by the results.

All from going Paleo. So, what is the Paleo diet? I’m glad you asked!

What is the Paleo Diet?

The Paleo diet… Well, let me stop us right here. The Paleo diet is sort of a misnomer, because it’s not really a diet, it’s a food plan.

I make that distinction because, to me, a diet is a food regimen that someone engages in to lose weight, usually over a short period of time.

A food plan, on the other hand, is a long-term strategy for eating foods that are healthy for someone to eat throughout their entire life. You might lose weight on the food plan, but that’s not its sole purpose.

So, with that cleared up, let’s talk about what Paleo is.

Paleo, short for Paleolithic diet, is a food plan that is based on the idea that natural food is better than super-processed-not-real-food food. Some people call the Paleo diet the “caveman diet,” because a simple way to explain the diet is to tell people that you basically eat what the cavemen would have eaten.

That’s the basic idea. But let’s go further in depth about what exactly someone eats on the Paleo diet.

Meat, vegetables, and fruits and the building blocks of the Paleo diet.

No bread? No bread.

If you’ve been in a grocery store or a restaurant some time during the last couple of years, you’ve probably noticed an explosion of wheat-free and gluten-free stuff.

That’s because there is a ton of scientific-stuff coming out revealing that wheat and gluten sensitivities are a lot more common than anyone would have ever thought. Chris Kresser, one of the big names in the Paleo world, talks about gluten intolerances in his article 50 Shades of Gluten (Intolerances).

Beyond how common gluten intolerance is, Paleo also removes grains, dairy, and sugar from the diet. This is based on scientific studies (and for us, personal experience) that humans simply cannot process corn, rice, milk, cheese, and pure sugar as well as we think we do.

These non-Paleo foods force your body to work extra-hard to digest them, leading to problems with inflammation, heart disease, and others.

That’s the general idea of what it’s like to eat Paleo.

When someone first becomes Paleo, it can be surprising to learn that just about everything that you pull from the shelf in a traditional grocery store contains either gluten, high fructose corn syrup, or corn.

Even the gluten free stuff? Totally! When the company takes the gluten out of a product, they have to replace it with something.

Guess what they usually replace it with. Corn.

So even if something is gluten free, it’s not typically Paleo. Even some of the stuff that is labeled as Paleo isn’t.

So being Paleo requires that you spend a lot more time reading labels.

But once you get past that, find some great foods and dive in, you’ll probably soon start to notice that you have more energy.

You are better fueled because you are eating stuff that gives you energy, rather than consuming junk that gives you the jitters, making you think that you are energized, then it ends up leaving you exhausted.

And things continue that way for a few weeks. The next big Paleo-milestone is when you get the Paleo flu.

The Paleo flu can last anywhere from a few hours, to a few days, to a little more than a week when you feel like you have the flu.

You’re out-of-it and you have a stuffy nose. This is your body adjusting to your new diet. After you make it through the Paleo flu, the symptoms lift, and then a lot of people describe feeling fantastic.

For me, the symptoms just stopped. I didn’t feel crazy-good, but it was nice that I didn’t have to blow my nose constantly.

After adjusting to the Paleo lifestyle, if you eat something that’s not-Paleo, it’s really noticeable.

It’s typical to feel cranky, cruddy, exhausted, and sick. These symptoms don’t feel good, but it’s kind of nice to know that your body has adjusted to living on real food, and that junk food literally makes you sick.

Have you heard of the Paleo diet? What do you think?