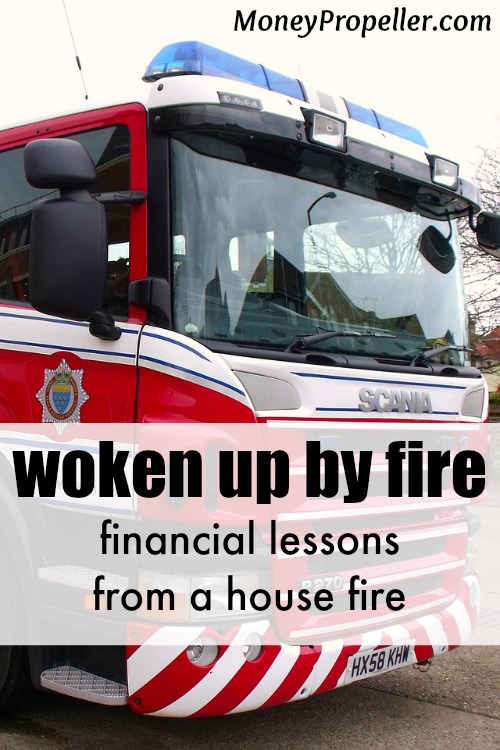 I didn’t have to work today, so when I got two text messages at 5:55, right after my normal departure time, I almost ignored them. Last night I parked a company vehicle and I thought the messages might be about it’s location. It was only a little bit further over from the normal drop off location, so I figured that if I ignored the messages for approximately 1.5 minutes, the person would have walked far enough to find it.

There were two messages, though, and my curiosity got the better of me, so I rolled over and read them.

“There’s a fire on the back side of the condos, 2nd floor.”

This from my neighbour who lives on the street behind my condo building. Obviously I was a bit confused, given that I was half asleep, and responded “Like outside?”

In the gap between the initial messages and the photo, I had gotten up and was going to go outside to talk to him.

After he sent the picture, I turned around, immediately woke up my spouse, thew on pants and a jacket, and started running toward his driveway, arriving about the same time as the first fire department vehicle. The building alarm wasn’t going off yet because the fire was outside on the balcony, my spouse pulled the alarm and took the fire fighter inside.

The very scary part was that the fire was in between the barbecue and the wall. We have natural gas barbecues, and on the other side of that wall would be the natural gas fireplace. The potential for an explosion and a major fire was very high. As people exited the building, my neighbour kept telling people to back up in case it exploded.

Thankfully, the firefighters arrived very promptly and had it fully out within twenty minutes of the call. The damage is almost entirely contained to the balcony floor, the door jamb and the exterior wall.

Financial & Other Lessons from a Fire

Where to start? There are so, so many lessons.

THE MOST IMPORTANT LESSON:

When a fire alarm goes off, GET OUT.

The people one unit down and over came out onto their balcony when the fire alarm started going, looking around. My neighbour and I were motioning and telling them to come outside, which culminated in us yelling “GET OUT!” as loudly and clearly as possible, well louder than necessary, because they were so close to the fire, had no idea and were just dawdling around.

Later on, I also saw people who hadn’t cleared out of their homes. The firefighters eventually cleared everyone to enter the lobby and common room area only.

Had my neighbour not been heading to work and noticed this fire, the potential for injury and extension property damage would have been much, much larger. Remember, because it was outside, the fire alarm and sprinklers hadn’t picked it up yet. There was someone in the unit who was safely able to exit thanks to the fire alarm being pulled, the fire was contained before the sprinkler system went off (which is a HUGE, HUGE damage avoidance), the fire was contained before it dangerously interacted with the gas lines, and all signs point to the majority of the damage being non-structural.

Bad things don’t occur from multiple people calling 911 in an emergency, but assuming that someone else is already on it? Very bad things can happen.

Tenants insurance, homeowner’s insurance, building insurance, contents insurance. Whatever your living situation, have insurance. I’m not 100% on the details, but the unit owners will likely be responsible for paying the building’s deductible. Even a very small, quickly contained fire will have caused thousands and thousands of dollars worth of damage. Carpets have to be cleaned in the unit and in the hallway, everything needs to be deep cleaned professionally in order to get rid of the smoke damage, some possessions likely have to be replaced, walls may need to be repainted in order to fix smoke damage, the balcony structure and exterior wall need to be replaced, a window and door may need to be replaced, and several other units likely need smoke damage mitigation.

We know the folks who had this very, very unfortunate event happen to them. We were able to give them a key to our place, so that they have a home base, we let them stay with us while they sorted out insurance and new accommodations. They were able to borrow things from friends and from us.

Finally, my neighbour being able to text me after seeing the fire saved a TON of damage and kept a lot of people safe. Without his call, the situation could have been much, much, much worse, with injuries, extensive damage and perhaps even fatalities.

I am sure that I will think of a LOT more things as time goes on.

Have you ever been in an emergency situation like this? What happened?