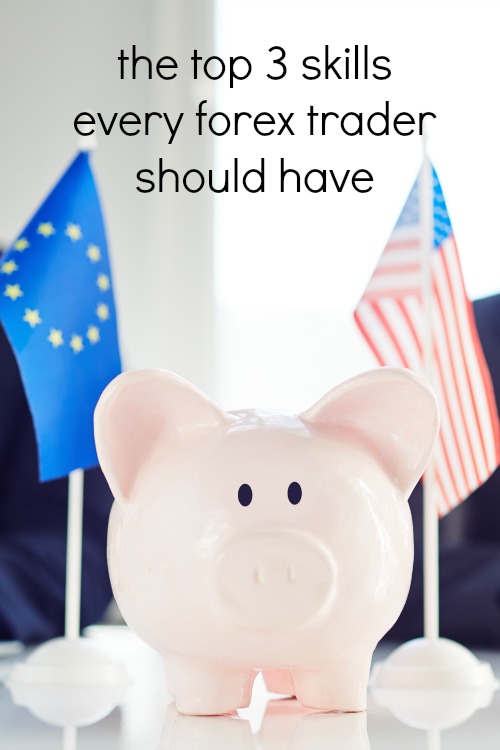 Being a successful forex trader is not easy. For everyone out there who makes a fortune, there are those who lose money on their first foray into the markets and never return. Sometimes this is because they just were just unlucky, sometimes they’ve not done the requisite planning, but often it’s simply that they’re not cut out for the fast-paced world of foreign currencies, even if they’ve done a little dabbling in investment in the past.

It’s true then, than to be successful, you’ve got to have the right skills, mind-set and personality. Not everyone is good enough, and not everyone can learn to be good enough either. If you’re considering becoming involved in forex, whether you’re adding currencies long-term to your portfolio, or you want the instant resolution of day trading, then pay close attention to the following three skills that we think are vitally important to being successful.

Profits and losses in forex are most frequently made in the smallest of changes, and this is especially true if you’re planning on being a day trader or a scalper.

Part of having an eye for detail is being able to spot these details while also taking in a large amount of information all at once. You need to be able to filter out the noise and look at what’s important to your strategy in particular. There’s a lot of detail to look at, but most of it is not actually going to be relevant to you. This kind of this is especially important if you’re going to be doing a lot of technical analysis, that is to say that you’re going to spend a lot of time analysing charts and patterns rather than understanding the external reasons behind market movements. Indeed, many successful traders assert that you only need to react to price movements; not predict them.

Of course, there are a great many tools that you can use these days that automate a lot of the process – spotting patterns and pulling you out of the market if necessary. Brokers like ETX Capital will offer orders like the stop-loss to prevent you being caught out. But these can never really be a fool-proof alternative to your own mind. Some people do have huge success with completely automated ‘forex robots’ but they’re few and far between – if they were perfect everyone would use them.

Having a cool head when it comes to trading is so very important, and it’s a quality that not everyone has, and one which can be difficult to master if it’s not an attribute you’d currently give yourself. Being calm under pressure is something that usually comes naturally.

Much of the reason that this is important is because while forex trading can appear to be like gambling, and indeed some products such as spread betting can be classified as such, it is not, and you must never let yourself get carried away in a similar way. Trading can certainly be fun, but it’s not something that you should be doing because it’s fun. Major mistakes happen when people lose their cool and make rash decisions – particularly with the ‘gambler’s fallacy’, which is to say that when things keep going against a person, they can sometimes believe that eventually the markets must change and favour them. None of your trades will have any real effect on any subsequent one.

Everything you do must be objective and have strategy behind it. When you first start to trade forex, you will develop a strategy which tells you what you’re looking for. Don’t deviate from this or you’ll inevitably find yourself in a mess.

The final thing we’re going to look at leads on from the last point. Your strategy is not something entirely rigid; it can and will change as you trade more, and much of this will come about when you make mistakes. It’s critically important when you trade that you can learn more about why things happened. When you got it right, what was it that tipped you off? And when you got it wrong, what did you miss?

It’s very easy to simply move on to the next trade once you’re done with the last one, but this just isn’t good enough, and you’ll never build a truly successful strategy until you learn to learn from your mistakes.

At the beginning of your trading career you’ll also need to take in a vast amount of information – there’s a relatively step learning curve that you need to get over if you’re going to ensure that your first few forays into the market aren’t unsuccessful. Those who aren’t willing to spend weeks scouring the internet for information on how forex works are not the kinds of people who should be putting their money into foreign currency in the first place.

There are of course numerous other skills that my may and will use during your time as a forex trader, but these are perhaps three of the most important ones. If you can ensure that you have the right mind set to thrive in a mentally stressful environment, the ability to deal with numbers and details, and the willingness to learn, then there’s no reason that you can’t make a success of forex trading, whether it’s just a hobby on the side, or a major component of your earnings.