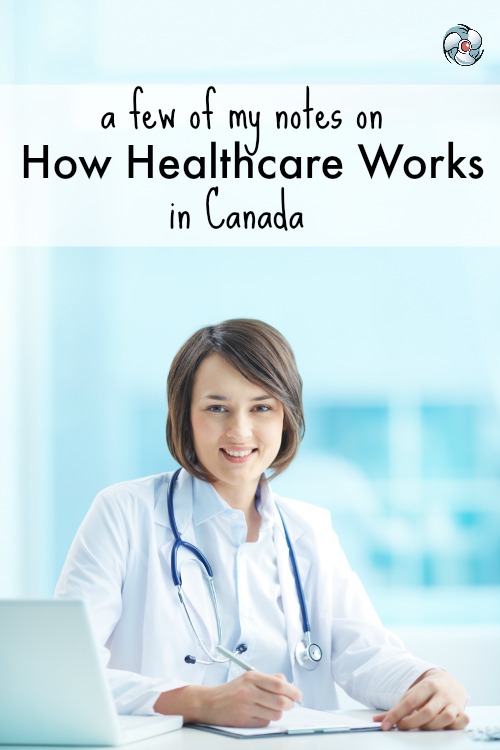 I just spent a bit of time submitting medical receipts to my insurance coverage, which of course got me thinking about the cost of healthcare in Canada.

That also reminded me that, despite its prevalence in the first world, it is a thing of great mystery to many, and it works quite differently in many places.

Here is a small smattering of notes on how healthcare works in Canada.

Most People Have Medical Insurance

For all of the things that are not covered directly.

I’ve mentioned before that I have some awesome benefits, like physiotherapy, naturopathic doctors, massage therapy and podiatrists.  For those, I can submit receipts, up to my limit.

In addition, “regular” Canadian medical insurance (the private insurance that many people have) will cover some portion of prescriptions, ambulance rides, crutches or braces, cast material upgrades and private hospital rooms, etc.

If you are in a hospital, any medication prescribed will not have a charge, but if you are given a prescription on discharge, or by a GP at a regular appointment, you have to pay for it at the pharmacy.

Certain Things Have to Be Purchased at the Hospital

My spouse had a knee injury a few years ago, that include a trip to the hospital, a few x-rays and a massive leg brace.  Everything that I have listed so far is free for anyone with a provincial health card.  But, we had to bust out our credit card before we could leave.

Yup.  We now own some crutches, if anyone ever needs any.  We also own a ~3′ long, massive removable full leg brace, that was free.  Sometimes these things are head scratchers.

Our medical insurance fully covers crutches, though, so we got those funds back.

Other things that have to be purchased at the hospital, that I know about, include compression socks, private rooms, sometimes cable TV, and gortex casts.

Some People Have to Pay for Healthcare in Canada

In fact, nearly everyone does.  Healthcare is under the purview of provincial governments, and each government has a different method of paying for healthcare.

For example, in Ontario, OHIP (Ontario Health Insurance Plan) is a cost on income tax filings.

In British Columbia, MSP (Medical Service Plan) is a monthly bill, set up as an auto-deduction.  Premiums are based on income, though, so the lower your income the less (to the point of free) you have to pay.  Most employers, for decent jobs, cover MSP premiums as a standard benefit.  Most benefit packages will cover post-secondary students, so I was 24 when I first had to pay for my own.  I was working at a coffee shop, so my premiums were very low.  Here is a table with the 2015 monthly rates for BC: 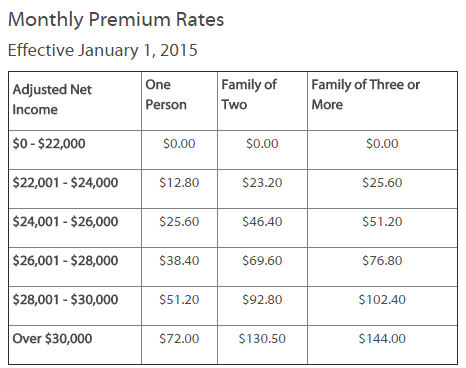 Since I was added to my spouse’s benefits, I haven’t had to pay.  Later, when I had a job that covered them, we switched to our family premiums being paid by me, as it is a taxable benefit and I am in a slightly lower tax bracket.

So, one way or another, most people are paying a nominal amount for healthcare in Canada.

In addition, if you do not have provincial coverage, because it is possible to not pay your premiums, then you have to pay for services.  I do not know what that cost looks like, but there is a gigantic sign when you walk into the Emergency room in my town that states the fee to be seen is $600, plus incidentals.  We have a lot of travelers from out of country and the only way the hospital receives reimbursement is payment up front.  People then have to submit to their travel insurance, pay off their credit card bill, or whatever their situation is.

Of course if someone comes in, in a life threatening situation, they are still going to be treated.

The last one that I can think of, at the moment, is non-emergency vaccines.  For babies and students there is a standard regimen of vaccinations and innoculations, usually done by the public health nurse at the clinic or at schools; two examples are hepatitis B vaccines in grade six and tetanus boosters in grade 10.  Once you are out of school, you have to pay for tetanus boosters.  I got one at a walk in clinic a few years ago, but I don’t remember how much it cost.  It was definitely less than $100.

That said, if you cut yourself and are taken to the hospital, you won’t have to pay for a tetanus shot.  If you are going traveling and need a yellow fever vaccine, for example, it will be out of pocket.

In larger centres, there are a lot of drop in clinics, for non emergency things like toe infections and if you think you might have strep throat.  For those clinics, you are seen first-come, first-served, by whichever doctors are working that shift.  This is something I really miss about living in the city.

For me, I call the doctor’s office and ask for an appointment.  There could be more doctors in my town, so often appointments are booked 2-3 weeks out.

I go to the appointment.  Let’s say my doctor wants to do a throat swab, and blood work for something pedestrian, like strep throat.  Plus let’s say I ask for a refill on a nasal steroid prescription.

The throat swab would be done at the office and I would be given a piece of paper with the blood work requests on it, to take to the lab.  In my town, it’s located in the hospital, but that’s not always the case.  I’m given the prescription, to take to the pharmacy.  I leave the doctor’s office (no billing) and go to the hospital lab.  I sign in, giving them my Care Card (MSP info card), confirm my address, phone number, emergency contact person and the request form.  After a few minutes, a lab tech comes and takes my blood, and I leave (no billing).

Otherwise, I would pay a dispensing fee (generally around $9), plus the cost of the medication.

Later in the week, I will get a phone call from my doctor’s office.  Many offices have a policy of not giving out test results over the phone, though some will.  In my experience, if a strep throat swap comes back negative, the office won’t leave a voicemail with the info, but they will tell me that when I return their call.  If it was positive, sometimes they will send a prescription directly to the pharmacy of my choice, if we had talked about the type of medication at my appointment, other times I will have to come in for a quick follow up to discuss meds and get the prescription paper.

A Real Life Example of an X-Ray

Last summer, I fell off my mountain bike and gave myself a canteloupe sized bruise on either side of my leg and a nice swollen blue foot.  For a few days, I figured it was just a sprain and also knew that it was still too fresh for my physiotherapist to do anything about it.  After a week of not being able to bear weight, I started to think that I might have a small fracture or chip in my foot.  So one day after work I grabbed a book and headed to the emergency room.  I signed in with the triage nurse (basically the exact same info as going for blood work), was pretty quickly taken to sit on a bed in emerg and read.

After a bit, the emergency doctor came to see me, played with my foot a bit and tapped around to see if I had any nerve issues.  She agreed there was a chance of a fracture and requested X-Rays.  The technician came about five minutes later and took 3 X-Rays, then I returned to sit in Emerg.  The doctor came to tell me that the X-rays looked all clear, so to keep resting/icing/anti inflammatories and go to physio in the next few days.  Then, I left (no bill).

Physio is not covered, but my benefits cover it up to a limit, so I am quite lucky in that regard.

[My foot is good to go now, and I haven’t had a massive biking injury (yet?) this year.]

That post got long!  Feel free to ask questions, if you are curious about how healthcare works in Canada, but remember that I am a Canadian and if you decide to be a big stinky meanie who gets all political, your comment is going to end up in the garbage bin.