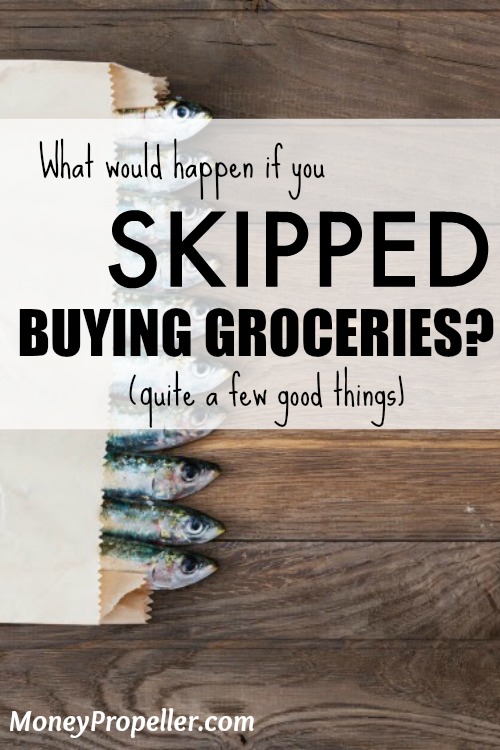 I normally come up with a rather rough meal plan on Sunday and then go grocery shopping.  I usually pick four meals for the week and the rest of the time we use what’s leftover, things happen to change up our food needs, or we make do with what’s on hand.  There’s often a dinner out with friends, or a BBQ where we only need to take one thing, a lunch provided by work, or some other event that changes up our food plans for the week.

One week, I decided I was going to put off going to the store for at least a day, because we had a reasonable amount of food on hand and, frankly, I just didn’t feel like bothering.  We went biking instead and I completely skipped buying groceries. 🙂

I have mentioned before that we end up spending quite a lot on food, for various reasons.  Two weekends ago, we unexpectedly went to Calgary and stocked up on fish and some other groceries while we were there, which meant we had spent even more than we normally do on food.

We probably saved a bunch of money.  We definitely wasted less food (though there were some peppers that were long lost, and some mushrooms that went moldy…. if only the fresh food in my town was fresher!).

We have a rather well stocked pantry, and currently we have an overflowing freezer.  That means that carbs and proteins are not in short supply, it’s more the fruits and vegetables that are a problem.  We don’t have very many veggies in the freezer due to allergies (for example, neither one of us is supposed to eat broccoli, for two totally different reasons, and broccoli is in a ton of the frozen veggie mixes that you can buy).

I tweeted (@moneypropeller) at Michelle, from the Shop My Closet Project.  She’s good at shopping fridges, too, and came up with some great suggestions.

I managed to make it all the way to the weekend without having to buy anything.  Party! I almost went to the grocery store several times, but thankfully my laziness prevailed.  Plus, by Wednesday, I had decided that I should be able to make it to Thursday without any problems.  I skipped buying groceries for an entire week!

These meals ended up including fewer vegetables and fruits than we normally eat, but every once in awhile I suppose that’s okay.

What Did We Eat While Scrounging the Fridge?

The beginning of the week didn’t require getting too creative, towards the end of the week I had to think a lot harder.

For dinner (and subsequently lunches) on Sunday, we had homemade squash gnocchi with an oil sauce and venison jerky, topped with fresh diced tomatoes.  That was on the plan for last week, but we never got around to it.

Lamb roast (yuck… in my opinion anyway) and grilled zucchini strips.  The lamb lives in the freezer and my spouse loves the stuff.  We also had a bit of leftover sticky date pudding from the dinner party we hosted on the weekend.

“Random everything stir fry” with soba noodles and scallops.  It turns out we have at least five bags of scallops in the freezer and no shrimp.  Who knew?  When scallops go on sale, they are usually more than half off, so I pick them up.  The “random everything” included a bag of green peppers, some green onions, jalapenos, limp celery and coconut milk.

By Wednesday this game was getting a fair bit harder, as we had already incorporated most of the veggies into the Tuesday night “toss it all in” stir fry.  I opted to make pea pesto with rice pasta, incorporating grated carrots.  We didn’t have any cheese that we could both eat, so it was olive oil, frozen peas, pine nuts, parsley and a bit of water.  If you’ve never had it before, I highly recommend giving it a shot.  It’s a lot cheaper than basil pesto, and includes more veggies!  It is also this gorgeous, super-bright green color.

I made a bit of a cucumber salad, consisting of only cucumbers, lemon juice, S&P and oil to go with them.  Again, more veggies would normally be our style, but not too horrible all in all.

My spouse had been on a work day trip and ended up eating a burrito at 4pm, so barely ate anything, which changed the plan for Thursday.

Crock pot cabbage rolls were my solution for Thursday… but then that’s not what I made, which is exactly why I only ever plan four meals per week.

A few months back, I spent a whole day prepping frozen freezer meals with a friend and it has been a fantastic decision.  I am getting toward the end of the freezer meals, but we each left that kitchen day with nearly a dozen giant ziplock bags of meals.  Easy meals rock!

I was going to make carrot salad to go with the cabbage rolls, which I still did.  The carrot, apple and raisin salad was pretty good, because for the first time ever I added some Sriracha

, in addition to the olive oil and apple cider vinegar.  It was awesome.  Plus, it used up the apples that were looking pretty sad.  I cooked some salmon fillets (the highliner type) from the freezer to go with the leftover cucumbers and the carrot salad.

This meal is pretty representative of what we normally eat: a protein and two to three veggie choices, sometimes with a carb.

I’m writing this before Friday comes around, because at that point groceries will be fairly moot.  We have a dinner at my spouse’s boss’s house on Friday and a fundraiser dinner on Saturday.

It also means that I made it an entire week without buying groceries!!!!!!  <- I like exclamation marks.

This wasn’t a challenge that I set out to do on purpose, more of a gradual thing that I decided to fully embrace halfway through the week.  I often know that we have more food than we need, but to force myself to use it was very useful.  Michelle challenged herself to only eat what she had on hand for a month and did amazingly well, while also eating very well!

There’s a lot of food options available if you stop, think and get creative to use what’s on hand.  I still have two jalapenos to figure out what to do with (they were in a recipe we made two weeks ago, but only available to purchase in a six pack… thanks, small town grocery store.)

You can eat a LOT of simple carbs that are shelf stable, and proteins as well.  We had zero shortage of those things, the fruits and vegetables were the really tricky part.  If you have a freezer full of vegetables, DO NOT GO GROCERY SHOPPING THIS WEEK.  You’ll be able to make it, I swear!

I am confident that it saved us money, but it would be hard for me to piece out how much, because I don’t track our spending in detail.  Plus, we stocked up on proteins two weeks ago, so the month’s spending is still fairly high.  If I had to venture a guess, despite the $100 worth of fish purchased two weeks ago, we are probably on pace for the month.

We ran out of some things that we normally have on hand, like balsamic vinegar, and I was tempted to treat that growing list of things as a reason to go to the store.  The store, a magical land of plenty, where I could stock up on fresh fruits and veggies, but I ignored the urge to go (well, I let my laziness prevail) and it kept me from buying more, unneeded food while I was there.  Who ever said laziness was a completely bad thing?  Not this kid!

Have you ever done a pantry challenge, or avoided the grocery store on purpose?