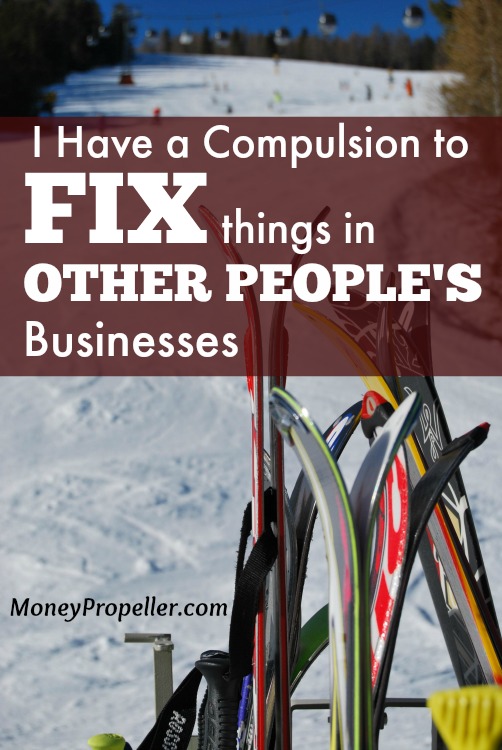 I like to stick my nose into other people’s businesses.

Once, a friend who owns a store, asked me for some ideas about marketing online.  We went out for lunch and I came up with idea after idea. I thought it was pretty darn amazing.  I absolutely love the brainstorming phase, especially when presented with specific parameters or challenges.  Sometimes, I fall down in the execution stage, but that’s only a limitation in my day job, really.

Recently, I’ve found myself in two specific situations where I was bursting at the seams with a desire to fix what were, to me, extremely obvious and easy to fix problems.  To quote my spouse, “I could six sigma the shit out of that.”

I live in a tourist town, as such there are a lot of transient workers.  Businesses do tend to suffer when they have very high turnover rates for staff.  Additionally, it is a destination, so there is a huge supply of workers for a smaller number of jobs.  So you’ve got low paid, highly transient workers, who may or may not be invested in their positions.  Some of them have business-world educations and experience, but many have held a string of retail jobs and are in their early twenties.

All of this is to say that my business-brain has many opportunities to kick into overdrive.  That happened the other day when my spouse and I were standing in a line to pick up our season’s ski passes.  As luck, and poor management would have it, that gave us plenty of time to think of ways to make the whole process better.

Easy ways.  To make it a lot better.

It took us nearly half an hour to pick up our pre-purchased passes.  There were seven people in the line ahead of us, including a family of three that was already at the counter when we came in the door, and a couple, who were also already at the counter.  In case your mind didn’t race to the math, that meant there were 2 people ahead of us in line.  It still took half an hour.

Thankfully, one small improvement had already been made from the previous year.  Last year, we joined a crowd of nearly thirty people, decked out in warm ski gear, to wait in a room that was heated enough that the staff were wearing T-shirts.  The guests were incapable of taking off enough clothes to avoid sweating, but the staff complained if a window was opened or a door was propped open!  Sweat is an enemy of the skier, because it makes you absolutely freezing cold on the lifts.  Additionally, warming up your body temperature too high makes the transition back to cold very difficult.  This year, they had fleece vests and long sleeve shirts on, and the room was a comfortable temperature in our winter jackets.

Onto the evident problems this year, again, with easy fixes.  There are three different waivers and forms.  You need one for a ski pass, one to add on the optional park pass, and the third if you bought a discount card that isn’t actually a full season pass.  You would think there would be some signage telling you which ones to fill out, wouldn’t you?

Nope. The kid in front of us slowed the process down a whole lot by getting to the front without any waivers filled in.  But, I really can’t blame him.  There was nothing telling him what he needed to do.  We only knew because we’ve done this many times before.  That brings me to my first solution.

Solution One: Print a piece of paper, maybe even two or three copies, telling people what to do.

There is also an option to fill out waivers online, though the company has a poor record of being able to dig them up when you go to pick up your pass.  Given that you are allowed to use prior year’s photographs, coupled with the online waivers, the ski hill should be able to pre-print passes for anyone who opts to use their old picture.  File them alphabetically, check photo ID, and ask for a signature on pickup.  Easy.  Fast.

As an additional bonus, it can be done using the down time and training time for your staff.  What better way to train people on how to issue season’s passes than to have them process a few hundred without any people skills required, just learning the computer system?

Solution Two: Pre-print passes and ask for ID for pickup.

There were six employees visible, with two helping with passes.  One lady was very clearly working on a project on the back desk.  Two were working for the ski school, and doing nothing, at computers behind the desk, and the supervisor was flitting around, with long bouts of standing.  There are good reasons to prioritize ski schools, as they are integral to the revenues of a ski hill, but this was underutilization of employees to the max.  These computers can also deal with season’s passes, I know this as a fact.  Even putting one employee on dual duty would have made a huge difference to the speed of the line, and also to perceptions.

Cross training is good for many, many reasons, not just this one!

While we were there, a girl who appeared to be a supervisor, interrupted the lady working with us to provide non-time sensitive, nor critical, feedback, which took several minutes.  That’s a harder fix because it requires prior knowledge and some business culture knowledge.  In that vein, there were a few other observations and ideas, but they were things which required a more nuanced approach.

If only the three suggestions here were implemented, it would create a much better customer experience, increase the productivity and skill sets of employees, and create efficiencies.

We also ran into our massage therapist in the line and I got to thinking about how she needs an email list.  I should talk to her about that, too.

I am very curious, does anyone else have this compulsion to fix things in other people’s businesses? I can’t just be me, can it?  What kind of things jump out at you?