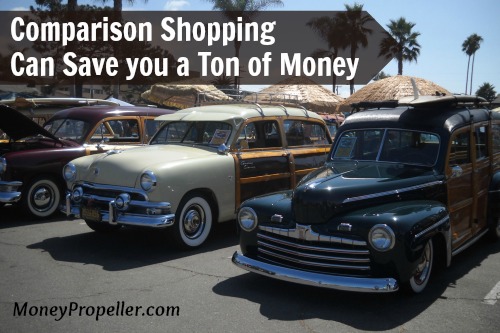 Do you ever find it funny how some folks will put in a lot of effort to ensure they can purchase bananas for three cents less per pound, or will drive halfway across town to save a penny or two on gasoline?

(For those of you who aren’t from here, in Canada we use a rather random mix of metric and imperial units, similar to in the United Kingdom, but different.)

Back to the matter at hand, though. There are people who will go to great lengths to save a few pennies, or dollars, here and there. Some of those same people, though, will completely ignore places where comparison shopping can save you a ton of money.

The biggest purchases we make are the ones where we usually have the most control over the cost and the savings. Here are a few examples:

If you are down to two universities, with the same calibre, and even the same tuition, picking the town with the lower cost of living can save you thousands of dollars per month. If you have to hold a lease for 12 months of the year, which is common in student towns, and live in residence for the first year, if your rent is $100 less in Town A than Town B, you can save $3600 over three years, and that is just on rent.

That’s a way to save a ton of money in one decision. Of course there are a lot of factors that go into selecting a school, but cost of living is separate from the cost of tuition and still very important when it comes to total cost.

There are times in your life when you will want to have access to reasonably priced credit, and perhaps even times where you will want to utilize that credit. When people use a loan, it is usually for an appreciable amount of money, thousands, tens of thousands, or even more in the form of a mortgage. Despite the easy savings, many people just accept whatever their current bank is offering.

Assuming you have an average of $20,000 borrowed for a year, saving a percent on the rate of your loan is worth $250 to you. In most cases, you can find out if you can receive cheaper rates elsewhere, plus fill in the requisite paperwork, in less than two hours. That means you would be earning around $125 an hour for your efforts. If you have even higher rate debt, the savings achieved by moving to a LOC from a credit card can easily make it into the thousands.

The best part about searching for loan interest rates is that you can get a pretty good idea of what is available without even having to pick up the phone. You can head to an online comparison site, like this one in Europe, and make some decisions from there.

Many, many things can be said about the costs of buying a vehicle. One of the easiest ways to save a ton of money on the purchase of a new one is to pick up your telephone. Prices can vary by thousands of dollars, for the exact same model, colour and all, from city to city. Pick up your phone and call around. Saving just one thousand dollars by comparison shopping is worth more than a full day of effort, to most people.