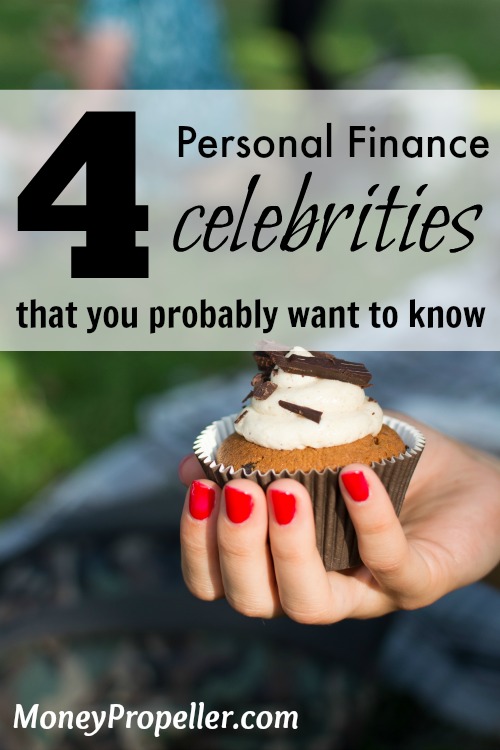 Every industry has its celebrities and the world of personal finance is no different. If you are an avid reader of personal finance blogs or have ever browsed the finance section of a bookstore, you’ve likely come across the same few names many times. Although every “personal finance celebrity” has their own area of expertise and their own approach, their goals are the same – they want to educate the public about money, by selling their knowledge and their products.

” series of motivational books that focus on financial education. With a background as an American investor and businessman, Kiyosaki has a reputation for being controversial – both for his views on money and investing and for his questionable business practices.

”, published in 2000, has sold over 26 million copies and claims to be “the #1 Personal Finance book of all time”. It is allegedly based on the true story of how Kiyosaki’s two dads – his biological “poor dad” and his best friend’s “rich dad” – changed his thoughts on money and taught him the difference between working for money and having money work for you.

Kiyosaki uses the “rich dad/poor dad” example as the main premise of his teachings. He compares the old way people generally think about money (go to school, get a job, keep working said job in order to pay the bills, etc.) to a new concept of obtaining financial freedom. He believes that by generating enough passive income through investing, business ownership and increased financial literacy, people can reach financial independence and will no longer need to support themselves by working and earning a regular paycheck.

The “Rich Dad” brand now boasts over two dozen books, dvds, games, and apps, as well as workshops, webinars, training sessions, coaching sessions and a mentor program. But this success doesn’t come with criticism and controversy.

There is mass speculation that Kiyosaki and his team are lying about their credentials, and that the “rich dad” character is made up (meaning that the foundation of Kiyosaki and the Rich Dad brand is a lie). They have also been accused providing misleading, dangerous and potentially illegal advice and for failing to address the amount of risk involved in starting and running your own business. Kiyosaki defends some of these accusations by claiming his work isn’t a meant to be a map to wealth, but instead a motivational tool to get people thinking about money.

With the motto “people first, then money, then things”, Orman strives to help people by candidly telling the truth about money. Her advice is pretty straightforward – earn more than you spend, cut out unnecessary expenses, pay down debt, etc. – but she has been criticized for being too simple and offering “one size fits all” advice.

Orman has also been accused of recommending products for which she is being compensated for. She caused controversy back in 2012 when she created and endorsed “The Approved Card” (a prepaid MasterCard debit card) and responded to critics by insulting them via Twitter. More recently, she taught an online class at a for-profit University while simultaneously warning students about the dangers of student loans.

Despite the criticism, “Orman is undeniably America’s most recognized expert on personal finance.” (Source: http://www.suzeorman.com/about-suze/suze-orman-bio)

Dave Ramsey is an American author

, tv personality and host of “The Dave Ramsey Show”. His call-in radio show, which airs on more than 500 stations, is heard by at least six million people each week and seems to predominantly appeal to the white middle class.

Ramsey approaches personal finance with a more classic perspective – you need to work hard to succeed. He has a “just say no” approach to debt, stating that your mortgage should be the only thing you go into debt for. Everything else – including your car and your education – should be paid with cash.

For those already in debt, Ramsey is famous for promoting the “Debt Snowball” method: continue to pay the minimum payments on all debts, but focus on paying off your smallest debt first. This method has received some criticism for ignoring the interest rates on each debt, but Ramsey feels that the sense of accomplishment that the small victories bring are more important.

His teachings have a strong biblical tone, but that doesn’t stop Ramsey from calling his listeners “stupid” or “self-indulgent”. He tells his listeners that they are responsible for their money problems, but also that they are in control of changing it. He preaches that there is always another expense that can be cut and there is always another way to bring in more income. He stresses that bankruptcy must be avoided at all costs, however, Ramsey filed for bankruptcy in 1988. (Perhaps that makes him more credible?)

Gail Vaz-Oxlade, a Canadian financial writer and tv personality, is probably best known as the host of the shows “Til Debt Do Us Part”, “Princess” and “Money Moron”. She has published several books

and has written for Yahoo! Canada Finance, The Globe and Mail, and Chatelaine magazine.

Vaz-Oxlade is “hell-bent on getting people to take control of their money and their lives”. (Source: http://gailvazoxlade.com/blog/) She focuses on getting people to live within their means and to get out of consumer debt. She believes that people can have whatever they want in life – if they are prepared to work for it. She often uses and promotes the “jar system” in which participants create and follow a budget by allocating a certain amount of cash to each jar (budget category). The idea is that once the money is gone, you stop spending, reinforcing the concept that you can’t spend more money than you have.

But Vaz-Oxlade’s tough-love approach doesn’t always sit well with audiences. She has been criticized for yelling at the participants of her shows without offering any real advice, and has been accused of humiliating them (one “Princess” allegedly took her to small claims court).

A common critique of personal finance celebrities is that they offer advice to the masses without knowing much, if anything, about the individual situations or considering the current economic state. A good way to avoid this problem is to do a little background research on the speaker you hire, and to make sure their approach would work well with your audience. There are a plethora of websites on the internet that allow you to find motivational and inspirational speakers for just about any event. Resources such as this can significantly cut down on your research time, as they allow you to search for speakers by their expertise, fee range, and geographic limitations. You can even choose to search only for speakers with videos, ensuring that you hire the perfect orator for your event.

It’s important to remember that personal finance is personal and that these financial “experts” are a source of entertainment. They are on the radio and television to earn a living by selling their products to the general public. Their advice is not intended to replace the one-on-one guidance people may need, but instead to offer hope and to motivate people to start taking control of their money.

Amanda hails from Northern Ontario where she ambitiously tries to live a life worth blogging about at My Life, I Guess.... She writes about getting out of almost $80,000 of debt, her struggles to find the right career, and the ups and downs of being a tenant (amongst other things) while drinking beer and watching too much tv.